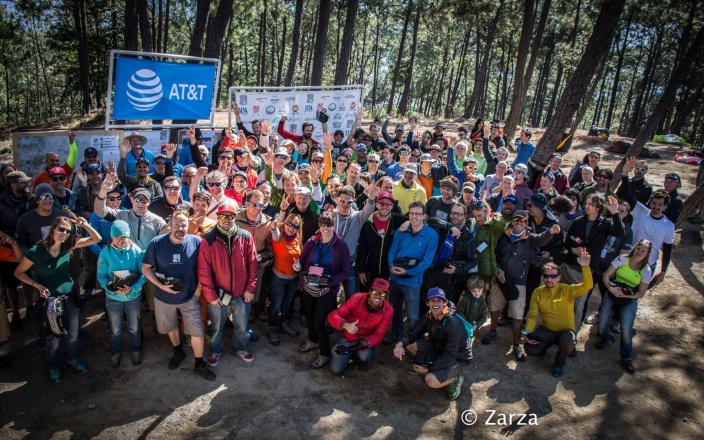 As the winners, from 10th to 1st place, were called one by one to the loud applausе of the Mexican spectators and fellow pilots to the flooding lights of the podium, I was saluting them all at slightly different volumes, each determined by my respectometer, but saving my loudest to that one and only first place, to the Champion we have this year.  Not just because he was first – I don’t care much about that (the respectometer determines your ranking better than the World Cup formula) – but because of the sheer style in which he won.  Stefan Wyss didn’t just win this comp; he showed a class of his own, over and above all the rest of us “best pilots in the world”, winning four out of eight tasks and doing very, very well in the other four.  Here it is in numbers: http://pwca.org/results/results/e_1_1.htm?ts=150412193453.  His last four tasks were all over 980 points!  He had actually already won the comp before the last task, but he took the last one too anyway, just to say “goodbye”.  Yeah.  Epic win.  And where respect is due, respect should be given, so there you have it.  Congratulations to our champion of the 2016 Paragliding World Cup Super Final – representing a little toblerone country squeezed between France, Italy, Germany, and Austria – Stefan Wyss!!!  Viva el campeón!

For me personally, the sportive side of the comp unrolled quite differently.  After the worst start of a competition ever, bombing out in the first two tasks and being 103rd overall, my only objective was to finish all the other 6 tasks in goal, so I could discard the first two thanks to the 25% FTV formula, which discards your worst quarter.  Third task, goal.  Fourth task, goal.  Fifth task, goal.  Sixth task, goal.  Seventh, goal.  And last task, three quarters of the way, everything going well, I’m flying just a kilometre behind the leaders and trying to push my way to them, when, with Yoann Chavanne, we take a line just slightly to the side of the thermal of the first guys, missing the climb, and there’s nothing after that, just gliding down and down, and the ridge is finished and it’s just the big canyon east of La Pila afterwards, and it’s time to make a decision – Yoann chooses to land at the edge of the canyon, I dive inside, desperately, refusing to land.  And I pour out my ballast water, the goal is no longer to finish fast, but just to get back up in any way possible and keep going to the finish, which is right over that ridge above me.  And I keep fighting and trying – I’m not bombing out right at the end of the comp, no!  I refuse to land!  I’m not fucking landing!  No!! – but in the meantime I’m sinking lower and lower, until I run out of real landing options and I have to choose the last possible bushes on the east face of the canyon before the thick forest at its bottom starts.  And next second I’m standing in that puto de canyon perdido – as we say in Bulgarian, “in the butt of geography” – my mission failed at the last moment, ranking destroyed, and right in that moment, post-stressfully, I feel an undeniable urge to piss right then and not a second later, so I let go in my catheter, but, no longer in flying position, it malfunctions and I feel the warmth of my urine flowing calmly but surely and unstoppably all the way down both my pant legs, completing the picture of disaster.  Epic fail.

No cell phone coverage, no radio coverage, no open spaces, just thorny bushes and thick bamboo on the steep slope, but luckily, a minuscule 2.5m by 2.5m clearing just big enough to pack my glider.  One hour to get the wing out of the bushes and pack it, one and a half hour more to crawl up the thick vegetation on the side of the canyon back to the sugar cane fields above, one more to reach the first village and one more to get back to Valle, while (almost) everybody else is celebrating in goal on the grassy beach of the lake.  But I’m fine, I’m more than fine, actually, I can’t complain; sportively I failed epically, but the adventure keeps going, and it’s good and I keep smiling, and after the prize giving ceremony it’s the big boat party, and our big flying family is back together, everybody dancing and celebrating to Pal’s house beats as the boat is cruising through the lake and we see Valle’s night lights as a dream, Pal dj-ing with skill and the house is booming and we’re dancing and the beautiful Mexican ladies among us are dancing with us, and then the afterparty at the Mesca keeps strong, and we’re so many friends celebrating the end of yet another adventure together.  Then it’s morning and it’s time to go and everybody catches the plane to their country, but I don’t go to the airport at all, I’m staying right here with my Mexican baby.  She’s the reason I’m late with this report, blame her, not me.

Win or fail, the trick is to stay celebrating the beauty of it all, to live in love.  With the world, with life, with the game we play, with her, whoever she is. 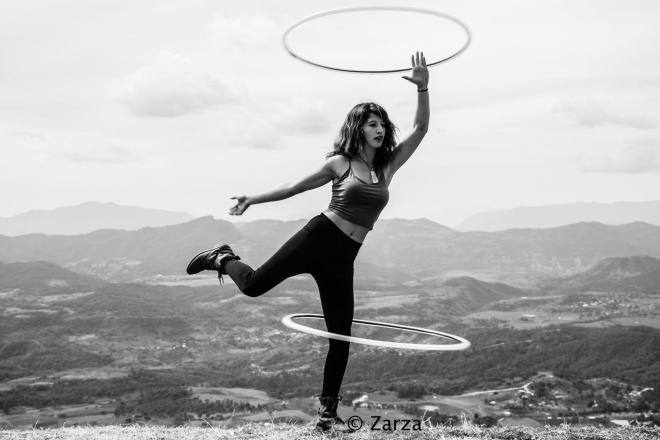 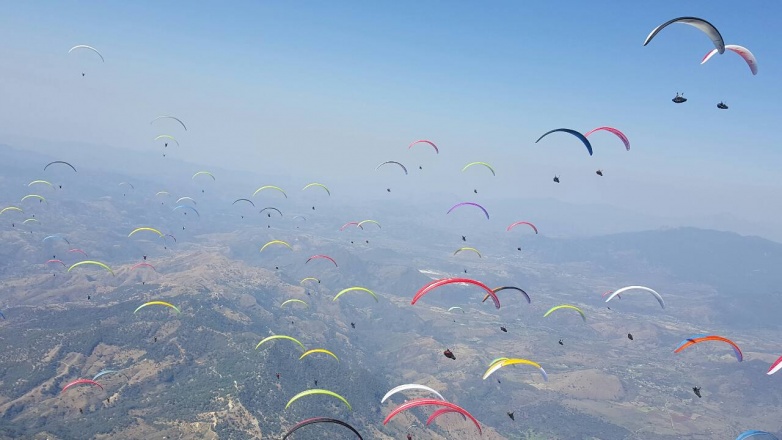 Air start.  I’m the white and black in the upper right corner, tip to tip with Felix.  Photo: Manuel Quintanilla 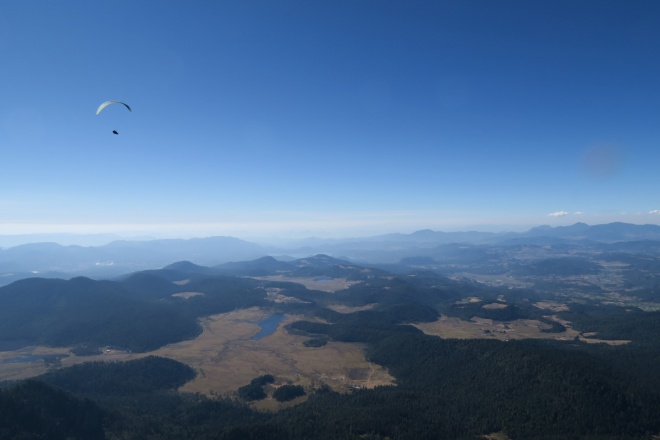 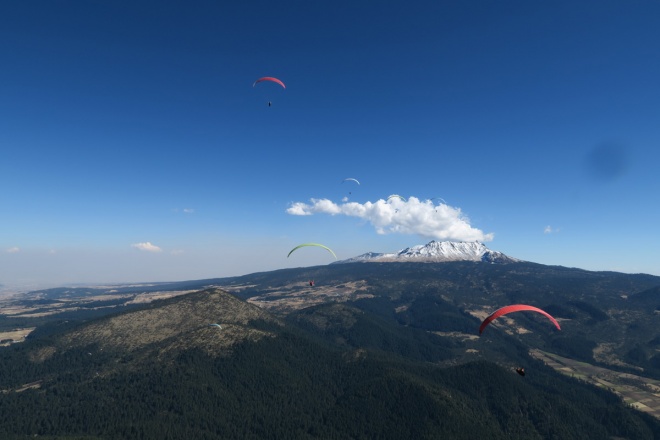 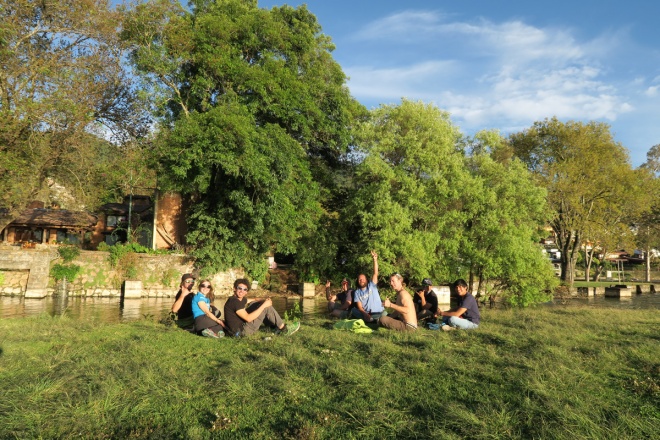 Chilling at the landing place with friends 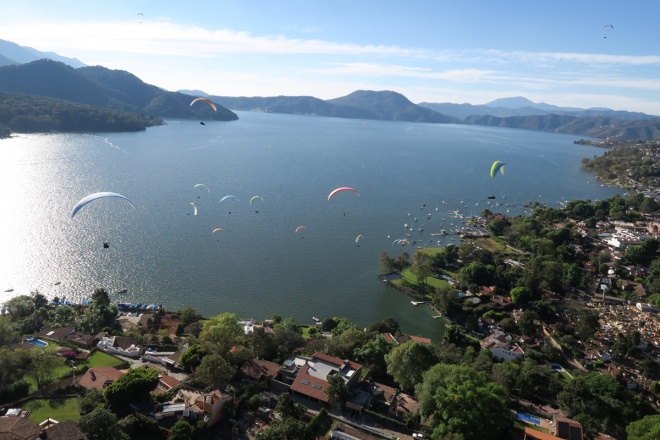 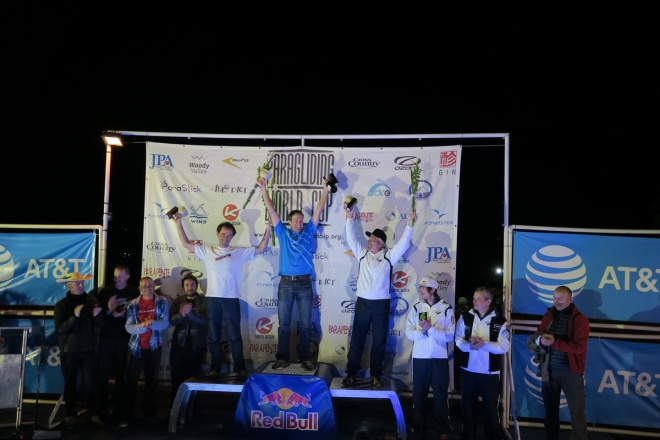