Cross country flying is kind of like mountain climbing, but inverted – from vertical to horizontal – in its core the same adventure across space, that challenge of the place beyond drawing you further, higher, deeper, to the outer limits of what you know and what you can, that place beyond challenging you to focus all your powers and perform, to conquer space and come back down a better man, improved, inspired, having completed something beautiful, yet completely useless.

In its fluidity, however, it’s more like skiing – the lines you draw flowing smoothly across the canvas of your landscape, restricted only by the laws of physics and your own imagination.

Speaking of imagination, I had seen the forecast and realized that one of my dream lines could be painted on that next day, so I bought a ticket for the night train from Sofia and spent all night on it to the other side of the country, to the flatlands of the north-east, and the village of Nevsha, where the takeoff was. Off the night train at 5am, I slept some more on the wood benches of the train station of Shumen, then rode a second train to Nevsha station, then hitched a ride in a wheat lorry to the village itself, then breakfast in the village square, chatting up some locals as they had their coffee and a smoke, as they bought their bread and groceries and told the city boy from Sofia what’s up and the city boy from Sofia told them what’s up just the same.  A couple of days before I had been there again, and had been asking around the main square for a ride up the 200m high hill where the takeoff was, but I had found none – there were few young people left in the village – most, as in all villages in Bulgaria, had left, to the city or abroad.  But a young man who was working as a manual worker for the town hall asked me: “What about a horse?”  “Sure.  It’s more romantic.  Bring it over, let’s go.”  We agreed on 10 leva (5 euro) for it, he immediately ditched work, fetched his horse and cart and took me up.  But that was the previous time I had been there.  This time some friends from Shumen picked me up and my journey time up the hill went down from 40  to 4 minutes.  Less romantic, more efficient.  Come on, let’s fly already.

Right after us, on the takeoff came George, a Greek pilot who likes to fly in Bulgaria and who on that day had traveled all the way to this corner of Bulgaria that’s furthest from his country.  I told him, “Cool, man!  You’re coming from there, and I’m going.  That’s the plan, at least.  I got some euro on me and I’m taking off in board shorts.  Let’s go.”

After that came the flying.  (Finally…  Wasn’t this supposed to be a paragliding story?)  First the flats and plateaus of the north-east, then the low ridges of east Stara Planina with a couple of my signature even lower saves almost scraping some dirt off the ground, then the flatlands of Gornotrakiiska Nizina and the worry in me growing that I’m drifting too far east and I could clip a part of Turkey (which, with the current Turkish political regime, is not an option), so I stray off the cloud streets too far to the right but I don’t know it then, so I lose some time but it works out anyway, and then over to the green Rhodopi mountains in the late afternoon, going deep inside them, scouting the terrain for landing places and houses where to maybe spend the night if I land out – slowly, patiently, going for the record, going for my beach, and it works, and hop(!), I’m over the last ridges and I make it over the Greek border and the Bulgarian record is 10k away, and I’m still climbing and smoothly drifting with the wind, further and further and now the sea is at my feet and I’m watching it as if from space, I feel I can glide ANYWHERE from here, and the record is 9, 8, 5, 2, 1k away, and I start a short video clip to record the moment, and “Yes!!”  I got it(!), 323 km it had been, now I’m over and I keep going, still high and comfy, lying back in my harness, soaking up the sunset glow.  Originally before the flight my plan had been to land on Thassos island, and now the island’s at my feet, I can surely reach it, but I think I can go further on the mainland instead and extend my record, and also from the mainland my retrieve back for some more of the same flying the next days would be way faster than if I have to take a boat back first, so I continue on the mainland, but still land where this line was supposed to finish from the very start – on the sandy beach, right by the water – and so I step down in the sand just as the sun is touching the horizon, after 350km of quality adventure into new terrain, ready to take all my clothes off except for my board shorts and celebrate with a big shout of “Yaaah!” and a plunge into the water, cooling off in style.

Then a friend from the border town of Petrich comes to fetch me and off we go for some fish and beer in a chic old narrow central alley of Kavala, the town where I have landed, and then the road back to Bulgaria in the night, another adventure accomplished, happy.

More and bigger things are coming, as I learn my land and I get better.  Bulgaria delivers.  And I love her.

Visualization of the flight: http://doarama.com/view/1533854

Going up to takeoff

Maritsa Iztok in the flatlands mid-flight

First foothills of the Rhodopi mountains

Thassos island on the left, Kavala on the right

Out of the water, mission accomplished. 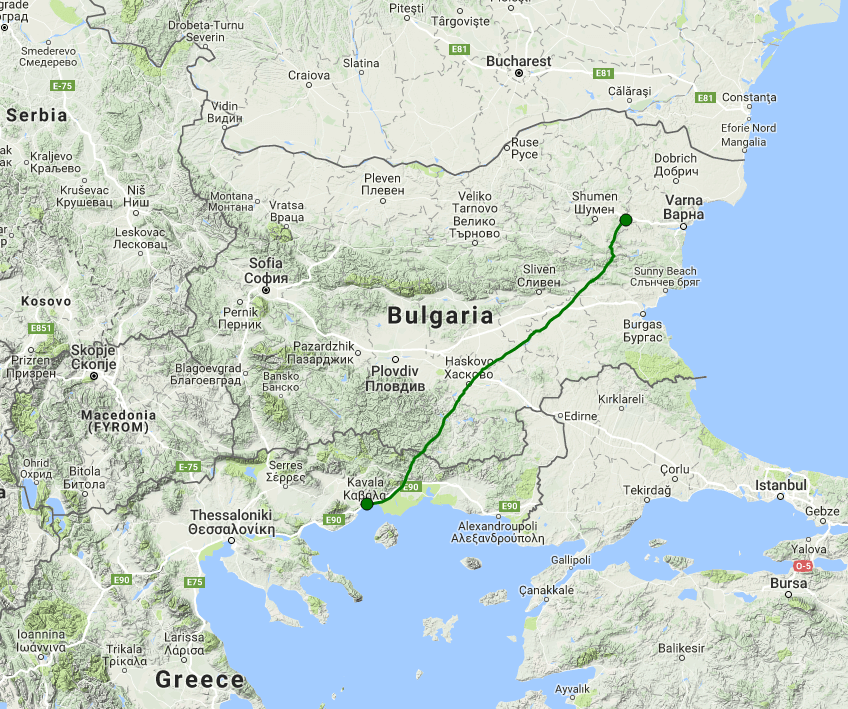